Most of the superlatives cannot but go yet again to the versatile Vladimir Gojkovic. Hats off to this gem of a player from Montenegro for a truly remarkable performance in helping our vibrant boys steal another march on the Blues in the first match out of the best-from-five series for this year’s title.

He led his colleagues in inimitable fashion when tightening the noose around our opponents’s necks whenever they threatened to lower our colours. A player of prodigiously big stature, despite his none too extraordinary frame…! 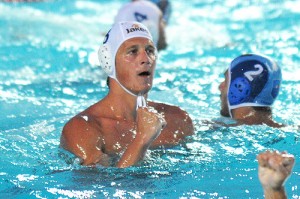 Our lads responded to the tune of this Pied Piper and more so after the harsh dismissal of the influential Tamas Molnar for some insignificant word of dissent almost midway through the third session towards Alessandro Severo, who was true to his name…!

The free-scoring Niki Lanzon was at the forefront of this clarion call, netting an invaluable naphand of goals which exuded an increasing sense of belief in the rest of his team-mates.

They all played their part in this fifth victory over Sliema on the trot this season, not the least, goalkeeper Ian Bugeja who grew increasingly safer as the proceedings unfolded.

Indeed, we showed steely qualities against opponents determined to stop their negative sequence against us. They led only momentarily in the first session after which we kept pushing to boss the scoreline very often by two or three goals.

We again surrendered our advantage after Molnar was dismissed for good three minutes 42 seconds into the third quarter. The Blues had just cut down the three-goal deficit to 9-7 then, after which they went on to level matters.

However, we showed our qualities when Edward ‘Ċoċċi’ Aquilina made it 10-9. Gojkovic added another to make it his second out of a total of four goals. The steam and ideas were still on our side as we closed ranks superbly in the last minutes when our advantage grew to 13-10 before Sliema made it less painful for them and their supporters with another goal.

Our character, resilience, knowhow and firepower were never so evident against opponents who tried to summon all their available muscle in a match which saw them unjustly starting on the same grid as ours due to the flawed league system of not rewarding consistency over the best part of the season.

The match was preceded by a minute’s silence in memory of the Sliema former stalwart goalkeeper and then administrator of long-standing, Edwin Meli, who passed away two days before.