A very positive start for Neptunes. Double winners in 1969, we also had outstanding players Bertie Portelli and Freddie Griscti declared Sportsmen of the Year in 1970 and 1972 respectively. Neptunes went on to win two championships in 1972 and 1977 and four Knock-Out competitions in 1970, 1972, 1975 and 1978.

In 1970 after losing the championship to Valletta, Neptunes went on to win the Kitty Kola Cup by beating the same newly crowned champions Valletta side 5-2 in the final, Paul Cachia scoring four of the goals. 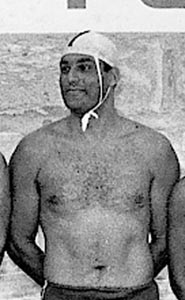 Bertie Portelli who was recalled from retirement for the second round league match against Sliema in 1972, and played a blinder; below, Freddie Griscti, arguably one of the best Maltese waterpolo players ever.

The 1972 title will long be remembered for the return of Bertie Portelli (bottom picture, left) for the final deciding league match against Sliema. A year earlier Portelli, much to his disappointment, was considered to be ‘over the hill’ and reluctantly was forced to retire. 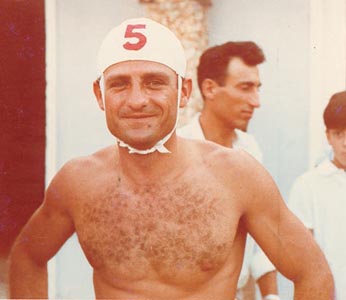 Freddie Griscti, arguably one of the best Maltese waterpolo players ever.

But Dr Loris Manche’, Neptunes’ coach, asked Bertie to turn out again for Neptunes, as kingpin of the side, as Andre’ Cauchi, was suspended for that game. Portelli kept Sliema’s British player, Mick Hale, under tight control and Neptunes went on to beat Sliema 2-1.

With the score at 2-2, two minutes 24 seconds away from full time, the Belgian international referee Angerhausen sent off City ‘keeper George Agius for hitting at Joe Chetcuti.

Agius had been pulled up for an ordinary infringement but to vent his feelings had a go at Chetcuti to earn his expulsion. Agius then swam in the direction of the official and started splashing water. The referee immediately abandoned the game and the  ASA awarded the trophy to Neptunes. 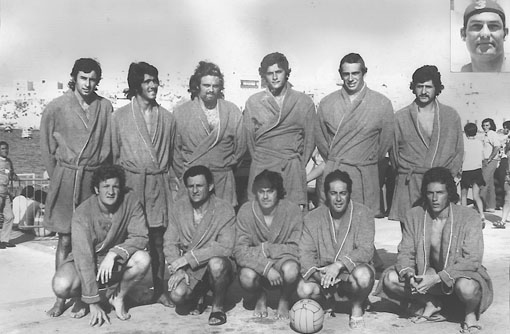 In 1973 Neptunes were again playing in the semi-final of the Knock-Out against Balluta. In the third session, with the result at 2-2, Stefan Micallef ‘scored’ what looked to be a legitimate third Neptunes goal, the ball clearly going out through a torn net.

Referee Eddie Xuereb and goal-judge Joe Doggett were deceived by the flight of the ball and after various protests the match was abandoned with the association deciding to suspend the competition for that year!

Among the ‘ordeals’ Neptunes had to go through was the final league match in 1975 against Sliema. On that day the referees were Michele La Gioia (Genoa) and Annibale Santoro (Sicily).

La Gioia’s control was a handicap for us as we had to bear with expulsions galore and our team almost played the whole match with six men. With three seconds to go and with Neptunes one goal up and with two players expelled La Gioia adjudged our goalkeeper Martin Xuereb to have ducked the ball when he was unceremoniously tackled from behind by Sliema’s Michael Gatt and a penalty-throw was awarded for the last action of the match.

1-1 was enough to deny Neptunes the title. It must be pointed out that during the last minute of the game, La Gioia kept continually asking the timekeeper what time was left for the end!

Neptunes’ revenge, however, soon came in the semi-final of the White Label KO when we out-classed Sliema 4-2. 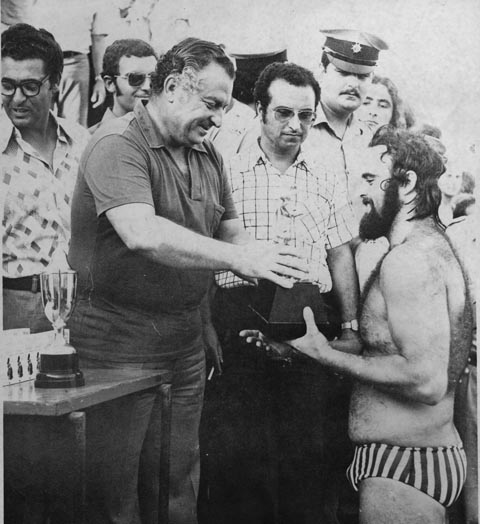 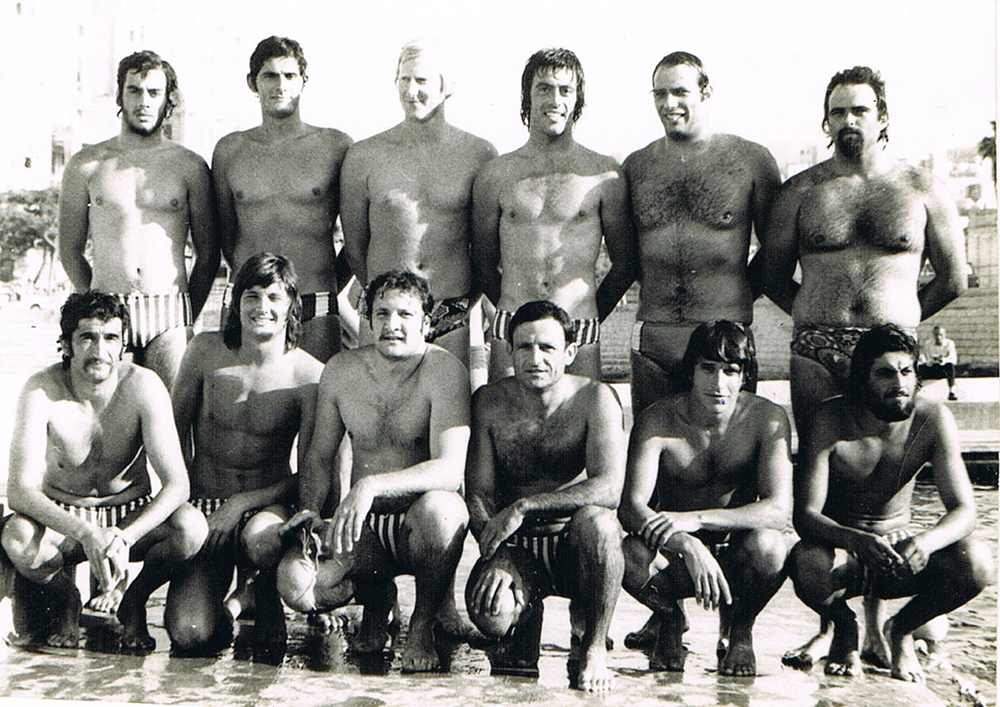 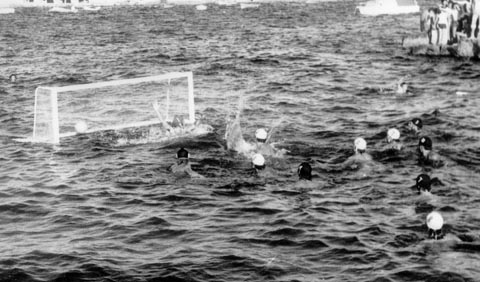 One of the episodes Neptunes had to endure in this decade – an annulled ˜goal’ from a penalty during the crucial second round league match between Sliema and Neptunes at Sirens Pitch on August 30, 1976. Ġużi Attard scores from a penalty-throw, the ball hitting first the inner part of the left-hand upright, then the supporting plank holding the back of the net, rebounding on to the inner part of the right-hand upright and landing out in front of Sliema’s goalkeeper Michael Soler. Referee Charles Micallef and goal-judge Anthony Willoughby, to everyone’s surprise failed to notice anything … and obviously Sliema went on to win the 1976 championship 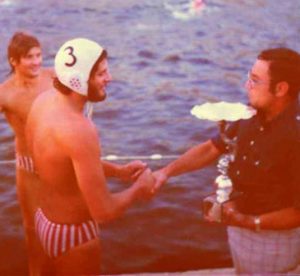 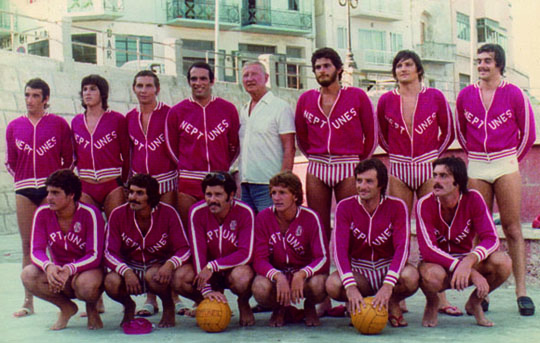 Neptunes spoiled Sliema’s impressive run of league wins in 1977 when our strong side was coached by the Hungarian Professor Geza Nemeth.

In 1979 Neptunes marked the club’s 50th anniversary with a pre-season tour of Tunisia and a tournament between five foreign teams, Hellas of Sweden, Durham and Liverpool University of England, Blau Weiss of W. Germany and Gentse of Belgium and Neptunes, Sliema and an ASA selection representing the Maltese challenge.

The Swedes won the tournament with maximum points while the Maltese teams finished with eight points each, with Sliema having the best goal-difference. 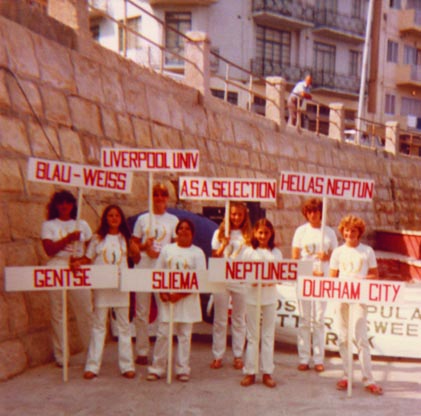 The girls who led the participating teams in the 50th anniversary tournament held in 1979 at our club, prior to the march past.