This year will forever be remembered as the ‘year of the pandemic’. The COVID-19 has created havoc all over the world and many planned events were negatively impacted with sporting competitions having either to be curtailed or cancelled altogether – not least in Malta.

The Aquatic Sports Association (ASA) decided to scrap most of the competitions after consultation with the health authorities.

The Winter League, which Neptunes won a record ten times and the President’s Cup, which we also lead with nine victories were both scrapped. The age-group competitions were also hit – the under-17 and under-20 leagues were disrupted after a few matches had already been played. The under-13 and under-15 contests were the only age-group competitions that were completed.

The first competition of the year, the Enemed Cup, started on February 15 and stalled on March 7, only to resume with the play-offs on July 15! It is interesting to note that the eventual winners, Sliema, only beat us 11-10 when our side was replete with untried campaigners and notable absentees were Stevie and Jordan Camilleri, Jeremy Abela and Jake Muscat. 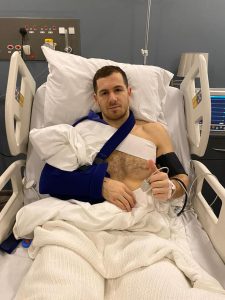 Jordan after his shoulder surgery 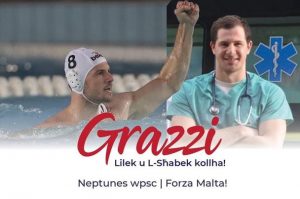 The poster put up in recognition of Jordan and his colleagues’ services against the pandemic.

late summer. After his recovery, Jordan was one of the frontliners attending to patients with the COVID-19 virus.A large poster was put up at the far end of the club’s swimming pool thanking him and his colleagues for their sterling services during the pandemic.

The Under-15s regained the championship they had lost in a decider against Sliema the previous season. By obtaining this triumph, Neptunes made certain of maintaining an uninterrupted sequence of honours in the junior category for the past 28 years! This is quite an impressive accolade for our nursery over the years. It was not only the results registered by the boys coached by the Montenegrin Nenad Navarin that were awesome, but the manner in which Neptunes built their victories was a joy to watch. There was quality in their game. 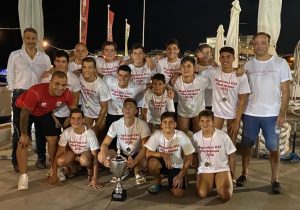 In the senior competitions, Neptunes were hard hit as it turned what promised to be another successful season into one of disappointment.

From the previous year the club had already made arrangements to secure world-renowned stars to turn out for Neptunes during this year and 2021. Darko Brguljan and Paolo Obradovic had agreed to play for us during this year while Aleksandar Ivovic and Denes Varga were set for 2021. These plans had to be scrapped completely as the Tokyo Olympics were postponed from Summer 2020 to July 23 – August 8 in 2021. This would understandably prevent these world-renowned stars from coming over to Malta in view of their commitments with their respective national teams in Japan.

Of course, losing our grip from the waterpolo championship, was a great disappointment, but although going through a heart-breaking season various matches gave us great satisfaction. The outstanding feature of Neptunes’ season was the players’ resilience when beating our eternal rivals Sliema on no fewer than five consecutive encounters – 14-4 (crossovers), 14-8 (premier division, round one), 10-8 (play-off semifinal, match one), 11-7 (play-off semifinal, match two), and 12-11 (KO Q/F after a penalty shoot-out).

The gallant performances that our players, led by new captain of the side Stevie Camilleri, managed to put up after the COVID-19 saga impressed not only the waterpolo connoisseur, but also the Neptunes faithful.

So, it was a feather in the cap for Popovic, to guide our team in the manner he did, with a minimum of resources. The Montenegrin mentor has crafted a structure and culture that got the very best out of the limited but precious talent he had at his disposal. Well, ultimately, that is the job of a coach.

In July, a very welcome guest at our club was the world-renowned Spanish waterpolo player Felipe Perrone. The Spaniard took part in an exhibition match between selections from our junior and senior teams and before and after the match he imparted his thoughts and experience on the modern game to the participants. 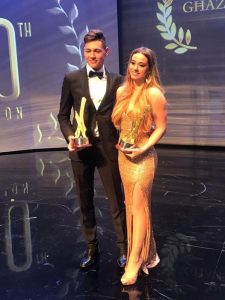 Jake and Mya showing off their deserved awards

Earlier in the year, Neptunes had a heavy representation among the winners of the prestigious SportMalta Awards. The presentation ceremony was held at the Hilton Portomaso. Seventeen-year-old Jake Muscat who this year established his place in Neptunes’ senior waterpolo side, and dedicated club swimmer Mya Azzopardi, won their honours hands down – the Young Sportsman and Young Sportswoman of the Year awards, respectively.

The obituaries list this year was somewhat alarming. No fewer than 12 club members or friends of our club passed away, most notable being old-timer Bertie W. Agius, Marivan Bartolo Parnis, ever-present at our club, the legendary Victor Cachia, Jonathan Chetcuti of Concept Stadium fame and brother in-law of our club president Matthew Bonello, and, like Victor Cachia, lifelong member and a staunch supporter and regular benefactor, George LaRosa. More sad news arrived as the year was approaching its end. In late November, the death of Billy Naudi, a former centre-man who had joined us from Sliema, was also announced, while on Christmas day committee-member John Sullivan lost his dear wife Rosemarie. It was the final act of a year packed with sadness. In these times of grief, saying goodbye to someone we love is heartbreaking. May their next of kin find comfort in all the special memories shared with our deceased members/friends. 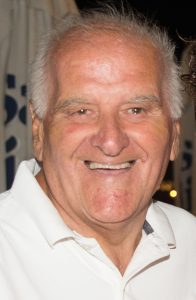 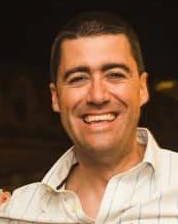 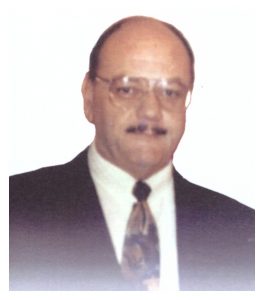 Neptunes reached agreement with Sliema ASC, for the transfer of left-hander Michael Spiteri Staines Michael who signed a four year contract with 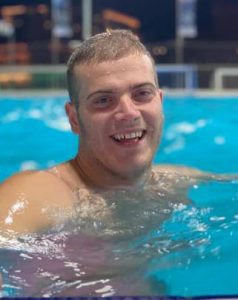 us. Michael joins his brother James at Neptunes. The Spiteri Staines brothers are the grandsons of legendary Neptunes goalkeeper Jimmy Micallef Eynaud.

Utility player and Neptunes product Luke Calleja has extended his contract with the Club for another year.

Meanwhile, Nikolai Zammit has joined Valletta United on a season’s loan. The 20-year-old left handed player will be teeming with his brother Miguel who had also switched his allegiance to the Citizens from Neptunes in 2019.

Valletta is the Zammits’ birthplace. Their father Charlie Zammit and uncles Joseph and Mario were all mainstays in the capital’s side.

Here’s wishing Michael and Luke as well as Nikolai a successful season.

The Aquatic Sports Association (ASA) intended to organise five waterpolo competitions during the winter, labelled Age-Groups Development Games 2021, and consisted of a ladies’ league, and league contests for the Under-13s, Under-15s, Under-17s and Under-20s.

Neptunes were taking part in four of these competitions, opting to once again miss the ladies’ event.

But, from the early days it was clear that the waterpolo competitions were going to be curtailed yet again in view of the COVID-19 pandemic, and the games had to be stopped abruptly.

It is rather unfortunate as all the Neptunes sides registered impressive wins in their respective opening matches. 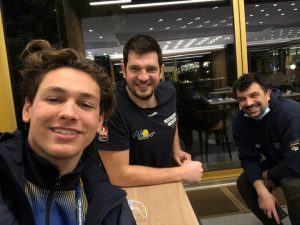 Jake Muscat is seen here with Petar Muslim (centre) and Darko Brguljan in Budapest. The former Neptunes’ overseas players were playing in the Champions League for their German side Waspo98.

Neptunes’ outstanding youngster Jake Muscat I, who joined Jadran of Herceg Novi in Montenegro, etched his name in the record books as being the first Maltese player to score in the LEN champions league. He did this on March 4 in Budapest against FTC Telekon Budapest. The Hungarian side won this match 12-5.

Another youngster in Herceg Novi was Sam Gialanze who spent around five months with the Jadran side.

The first competition to be completed during 2021 was the pre-season Enemed Cup Competition. It started on February 26 and finished four months later on June 2021, because it was suspended between March 5 and 16th July due to the COVID-19 pandemic.

Neptunes triumphed in this competition with a very young side, which had the Camilleri brothers unavailable. They beat neighbours San Ġiljan 9-8 in the final to land their first Enemed Cup title. 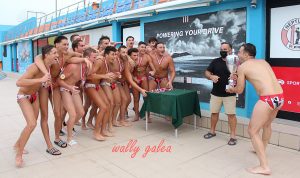