Adapted from The Times report 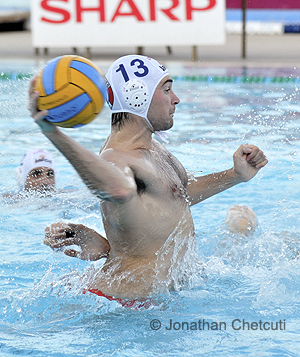 Neptunes Emirates were not quite in full flow early on in this game as they came up against a resolute Sirens Ritter Sport who went for effective stifling tactics.
However, the Reds opened up the throttle decisively in the last quarter after having been 11-7 ahead with the final session left.

Neptunes’ expertise and staying power, despite some glaring misses in front of goal, could not be denied and at the end of the day they won with goals to spare.

Neptunes took a 4-1 lead with Steve Camilleri scoring an early hat-trick. Sirens, without regular goalkeeper Alan Grech, fought back also profiting from a missed open chance by Michele Stellini. They pulled back two goals to make it 4-3 by the end of the first session.

The Northerners’ press with swift double-shielding on the centre was posing problems for Neptunes who also opted for tight marking. The Reds’ edge though helped them score five goals to their opponents’ brace, thus opening a 9-5 lead halfway through.

Sirens’ all-pitch stringent marking was kept up for the third quarter where the teams shared four goals.

Marco Risso’s team was still full of fight despite having to cut a leeway of four goals by the start of the final quarter.

Meanwhile, Niki Lanzon, who on Saturday morning (14th) became the proud father of a second child, was back in the fray after two early personal faults.

The Northerners’ promise dissolved in the pool in that last session as Neptunes’ graft and craft was too much for them.