Adapted from the Sunday Times report

Michele Stellini was the toast of Neptunes Emirates as he helped himself to a double hat-trick to down Sliema fairly and squarely in a match which the Balluta Bay team dominated almost throughout to grab their first BOV Premier Division Knock-out and the 21st honour in this competition.

It speaks volumes of Neptunes’ versatility when considering that the team’s scoring talisman, Steven Camilleri, who only netted one goal, was in the shadows yesterday. 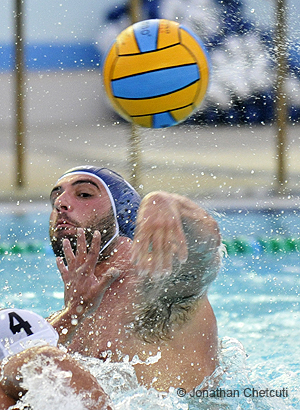 Michele Stellini - 6 staggering goals for him against Sliema

But his colleagues, including his brother Jordan, the expert Aleksandar Ciric and the tireless team-captain Niki Lanzon, marshalled the team to perfection despite the four goals scored for the Blues by Ferenc Salomon.

In the end the result was as deserved as it was clear-cut.

Sliema were slightly more clinical during a hard-fought first session which had Salomon scoring twice but Neptunes equalised on 2-2 before Stellini missed a great chance for a 3-3 draw only for John Soler to make it 4-2.

From then on Neptunes rarely looked back.

Molnar scored his first goal in three matches against compatriot Istvan Gergely for a 4-3 Sliema lead at the end of the first quarter.

Meanwhile, Steven Camilleri was rested for most of the second period as he was on two personal faults in the first session.
The Reds were the much smarter side in the second session with the Blues scoring on the stroke of time through Salomon after Neptunes had taken a 7-4 lead.

Sliema were too erratic on man-ups and very urgent on the point of shooting while shrewd Neptunes displayed more poise and power.

Stellini was still full of life in the third session during which he scored three more goals for a staggering total of six.

The Blues looked bemused but scored a possible lifeline goal through Brownrigg with some seconds left for the third session.
That was futile even if Salomon cut the leeway to 7-10 at the start of the fourth session.

Neptunes, though, continued to play with reassurance and they administered their lead thanks to a rock solid defence.
They had done the trick in the middle sessions courtesy of Stellini’s exploits.

The Blues looked subdued and were unable to react.

At the end of the match, Joe Caruana Curran, president of the ASA, presented the cup to Neptunes captain Niki Lanzon in the presence of Vanessa Macdonald, Head of Public Relations and Social Media at Bank of Valletta plc.