Sergey Markoch’s quest for more glory in local waterpolo started off the year 2013 on the right track. His boys in red returned to win the Bank of Valletta Winter League for the first time since 2008 and a record eighth title since the competition’s inception in 1994.

The composition of the winter league competition underwent a number of changes throughout the years but never escaped criticism especially when the play-off systems were used. 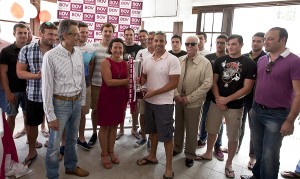 This year, however, the single round-robin pattern was adopted but due to the fact that Neptunes Emirates, Sliema and San Giljan ended up their commitments on equal points and no deciders were scheduled, the mechanism of goal difference in the direct encounters as per FINA rules, was observed.

So, since the top three teams each accrued 15 points, Neptunes  were declared winners of the competition thanks to a superior goal difference in direct encounters. They finished on +3 while San Ġiljan and Sliema ended on +1 and -4 respectively.

The result of Neptunes’ final match against Sliema, 12-5, will go down along the biggest league victories over the Blues in recent years.

Alan Borg Cole made his competitive debut for the club after his switch from Exiles, while Timmy Agius strengthened his claim for a permanent place in the squad after spending the past seasons on loan with other clubs. Kyle Debattista too, returned after a loan spell last term. The evergreen Steven Camilleri turned up for Neptunes in the last match after successfully ending his commitments with Italian Serie A side RN Bogliasco.