Summer 2012 was yet again a success story for our favourites Neptunes and their shrewd Russian coach Sergey Markoch. Though not as dominant as they had been during the previous summer, the Balluta Bay team managed to peak up admirably at the right time and thus prolong a winning streak that saw them retain the BOV championship honours for the third successive year for the 21st title in our 84-year history and also win the knock-out for a second ‘Double’ in two years, totalling nine in all.

This rosy patch in our club’s annals meant that the Reds have won five league titles besides two cup successes in the last seven years.

No one will argue that the Reds were the best outfit. In terms of consistency and scoring statistics they were tops. The players’ versatility and shrewd adaptable game plans were other hallmarks in their repertoire. Moreover, they again had two players in the top five scorers list, the irrepressible Steve Camilleri who headed the rankings with 78 goals, and Tamas Molnar of triple Gold Olympic fame with 50. 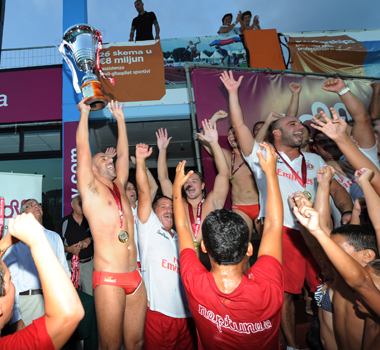 The team may not have gone through a runaway round robin summer phase like they did last year, but then they showed their mettle when they won this year’s best-of-five play-off series against runners-up Sliema in four rather than five matches. For the umpteenth time the main challenge was offered by the Blues.

Whereas in 2011 Neptunes won seven out of 11 matches against Sliema, with the Blues winning three and one drawn, it was closer this year as we beat our rivals seven out of the 13 times we met them, with five going the Blues’ way and a match finishing all square.

Coach Markoch was quick to point out that his team’s character helped them win this year’s top summer honours. He spoke of the team’s qualities and the work leading up to their triumphs this summer.

‘We had the physical build-up and the players’ individual skills within a collective framework foremost in mind and that needed time to achieve. The mental strength and power to recover in moments of difficulty were also evident, as was our character,’ the Russian said with glowing satisfaction.

‘These latter qualities emerged mostly when the team overcame the psychological drawback of having to face an on song Sliema in the fourth play-off match without the left-hander and potential match-winner Michele Stellini.’

Markoch remarked that the turning point of the season was when we were beaten by Sliema in the President’s Cup. ‘That made us analyse the situation and rectify matters. This resulted in better performances as the season unfolded.’

‘We showed that we could adapt ourselves to all circumstances, with the units interchanging positions smoothly when in possession and when having to mark and block the opponents. This, with self-belief, was an important recipe for success,’ he said.

Referring to this year’s standard of play, Markoch said that there was more equilibrium among most of the teams this time. ‘This balance is a positive factor which makes the competitions more interesting. Moreover, the colourful and massive support for the teams is perhaps unique in that most other countries lack the panache and emotion provided by the Maltese waterpolo followers.

‘I dare say that this is the most flamboyant championship in the world. I have come to admire all this in your island. Neptunes is one of the many teams that rallies warm support.’ the Reds’ coach stressed.

Our president Matthew Bonello, at the club’s helm for the past seven years, had words of praise for Neptunes. ‘This rosy patch since 2006 emulated the four-year successful stint we had in the eighties. Throughout the season there were moments of difficulty and inconsistency but the team has developed the ability to deliver when it matters,’ he said.

As for the players’ contribution to this year’s success, the fearsome scoring tandem of Steve Camilleri and Tamas Molnar was emulated by that colossus, Aleksandar Ciric from Serbia, and the ever-dependable captain Niki Lanzon, two all-purpose players of refined qualities.

New recruit from Sirens, Clint Mercieca (this was his second title after winning the league with the St Paul’s Bay team) adapted himself admirably to his new less offensive role while Michele Stellini was his usual forceful attacker. Goalkeeper Ian Bugeja provided moments of inspiration complemented by stand-in Ryan Sciortino.

Stout defender Jordan Camilleri and the galvanised Sean Gravina were very useful cogs in their team’s set-up, while Edward Aquilina also gave his contribution at given moments. Tailenders, Gabriel Pace, Zak Mizzi and Benji Lanzon were always there when the occasion demanded.

As for the other teams, the thoroughbreds Sliema are to be commended for their challenge in their centenary year which again made for an exciting end to the season. San Giljan proved a competitive outfit and managed to record victories over all opponents. Sirens finished on a bright note and were unluckily punished by the otherwise improved play-off format which impeded them from maintaining their momentum if a multi-round system had been adopted. The forward-looking Exiles were only seen in patches.

In the second tier league, which offered some balanced encounters, Marsascala, under the guidance of Pierre Borg, confirmed their edge when landing the double. It was their 19th league title in this division. Valletta and the improving Otters were worthy opponents throughout while Ta’Xbiex lagged behind despite their efforts.

In the cadets’ leagues, Sliema won the Under-20’s, San Giljan the Under-17’s and Neptunes kept up their staggering feat of at least landing a junior honour every year for almost the last quarter of a century when wining the inaugural Under-13 league and that of the Under-15 category.

It is to be noted here that our team has recorded three more ‘firsts’ in their history. The juniors won the first edition of the Under 13 and Under 15 leagues, while the seniors won the championship for the first time in its amended play-off format.

Efficiency on the pool deck by the match secretariat, the pool staff and generally good refereeing helped to make it a successful summer. This was replete with numerous disciplinary decisions which, however, could have done with less tinkering.