A Neptunes member who can proudly say that he has occupied almost all administrative and technical positions within the structure of the club is Surgeon Major Loris Manche, currently Honorary President of the club.

Now in his late eighties Dr Manche can boast of having been a player, a committee member, secretary, president, medical adviser and coach. You name it, he’s done it..! This rich pedigree of versatility endorses an impressive connection with the club spanning almost three-quarters of a century. 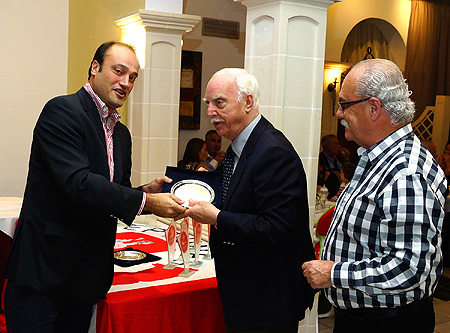 His late wife, Yvonne, nee Wismayer, was always by his side during Loris’s active years of service for Neptunes. Her presence also as a staunch supporter invigorated and spurred him to give more for Neptunes.

We are all very proud to have Loris as a prominent elderly member who has and is still having Neptunes close to his heart. His presence even at his advanced age at the National Pool tal-Qroqq whenever the team is playing is proof of this great affection.

Highlights of his connection with Neptunes as a player and coach.

Dr Loris Manche is undoubtedly the epitome of what a loyal club member should be. His presence at the club re-evokes among other elderly members pleasant memories of Neptunes’ past glorious days.

During the end of season dinner Loris’s achievements were highlighted by president Matthew Bonello after which he was presented with a token of appreciation on behalf of the club’s committee. It was a fitting and deserved tribute to him.

Thank you very much Loris.