Besides our club’s proud history of supplying Maltese waterpolo with several talented players of the highest class who performed with honour for their team and country, Neptunes can also boast of luring some top quality names from other clubs. In the last four decades these class performers include, among others, Alfred Grixti, Freddie Portelli, Ġużi Attard, Tony Camilleri, John Paris, Ian Azzopardi, Matthew Pisani, Ian Bugeja and recently Clint Mercieca who all had a say in our team winning the honours. 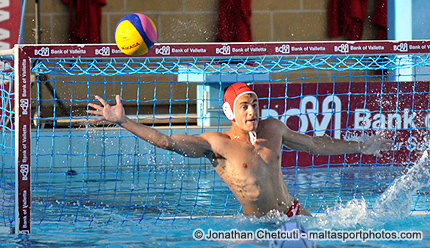 The latest acquisition in this respect is that of goalkeeper Alan Borg Cole, the Exiles and Malta goalkeeper who joined our ranks late in January on a six-year deal. This included an undisclosed fee as well as the transfer to Exiles of Ian Bugeja, who helped Neptunes win two doubles in successive years.

Borg Cole started playing for Exiles’ junior teams when he was 13 and at the raw age of 16 he made the keeper’s position in the senior side his own. His progression was remarkable and it was no surprise that his skills between the sticks earned him a first call up for the national team. That was in 2009 when Malta took part in the Len European Championship in Lugano, Switzerland.

He continued to flourish and eventually became an automatic choice for Malta, something which has been maintained till today.

Soon after his transfer was concluded Borg Cole said he was extremely satisfied to have joined Neptunes. ‘I am very proud to join Neptunes which boasts a long and illustrious history. I consider this as an important event in my career as well as in my personal life. I hope to guard the posts as well as the many renowned ’keepers who played for the club before me.’

While thanking outgoing goalkeeper Ian Bugeja for his excellent service during the past three seasons, we are all excited about this new acquisition which was announced by club president Matthew Bonello. We are sure that with Alan Borg Cole as an extreme defender, Neptunes’ rearguard will be a very solid springboard for more success by our team.