Joe Gatt, better known as PL among his numerous friends due to his legal profession, is the second most elderly Neptunes member and at 89 years of age he still frequents the club everyday especially in summer. 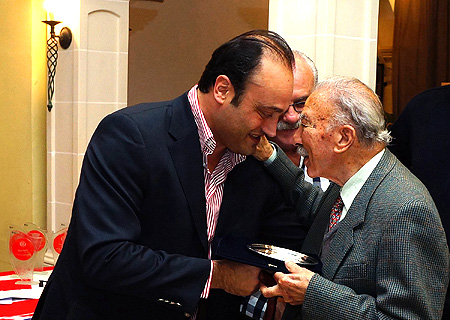 Joe, a likeable and unassuming character, is also an avid Neptunes supporter who is ever-present when the senior team is engaged in a competitive match. Indeed, he is part of our set-up, almost always flanked by his wife Mary whenever he ventures down at the club.

His love affair with Neptunes took root in the early thirties when as a fledgling 10-year-old he started frequenting the club which had its first small wooden structure on the rocks adjacent to a makeshift pontoon at Balluta Bay.

Joe is the eldest surviving club member who was first down at the club. That makes it almost an 80-year connection with Neptunes, which is something he prides himself in.

As a player he started as a member of the popular Neptunes Sharks team in the early forties after which his services for the club turned to administrative ones.

For a period he had his summer residence in St Julian’s and then Mellieħa but relocated himself close to his favourite Neptunes haunts to continue rendering services for the club in an administrative capacity.

During the sixties Joe was the ASA club delegate and served in that role for a number of years. He worked in liaison with the late Stanley Ellul Mercer, the long-serving club secretary, and other other prominent administrators such as former presidents Angelo Debono and Loris Manche.

The highlights of his connection with Neptunes are:

Joe, is a veritable stalwart member at Neptunes, who has made the club his second abode for many years.

During the end of season dinner, president Matthew Bonello rightly reminded the numerous members present of this eminent member’s strong ties with Neptunes when he praised him for his love for the club. Joe’s presence for that occasion was greatly appreciated. More so when he was presented with a token by the president on behalf of the club’s committee.

Thanks to Joe Gatt we have a strong umbilical link to our club’s glorious past.  We all look forward to seeing the younger generation of members emulate Joe in strengthening their own ties with Neptunes.