All good things come to an end. The golden era somehow had to become a thing of the past.

Our Russian coach and an ex-waterpolo player of the USSR, winner of several medals in past editions of the Olympic Games, World and European Championships and, significantly for Neptunes, the man who steered our team to a record five championship titles in a row between 2010 and 2014, besides being in charge of our title-winning side in the latter part of the 1993 season, will not be at the helm to seek a sixth championship crown with our boys in 2015. 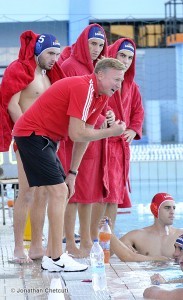 Markoch was being sought by Kazhakstan to take charge of their national team in the wake of the country’s imminent qualification for the 2016 Olympic Games.

The news of the Kazhaks’ qualification was confirmed late in summer and despite the allure of our country and his success with Neptunes over the years, the man finally decided to take up the prestigious assignment.

He and his family, wife Alena, his sons Peter, Shtefan and Thikon will be sorely missed. They were certainly all affable people and numerous members will indeed relish their memories

We look forward to seeing them all again in our midst, Sergey in his technical capacity and as a tourist and the rest of his family as affectionate acquaintances.

To Sergey and his family a heartfelt ‘Au revoir.’