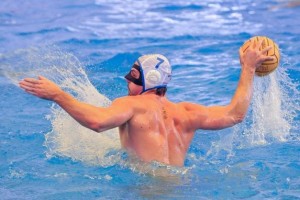 Stevie Camilleri scoring one of his 3 goals – Photo courtesy rarinantesbogliasco.it

After incurring a broken nose when playing for RN Bogliasco last month our ace scorer, Stevie Camilleri, returned with a bang for his Italian team early in April. Wearing a protective mask, he netted a hat-trick in Bogliasco’s 13-11 victory over Como Nuoto, a result which means that the side from Genova could still entertain hopes of qualifying for the play-offs reserved for the first eight-placed teams in the Italian top league albeit against one of the very top teams.

His three goals kept him at the summit of his side’s scorers’ list with 36 goals, besides the 16 he netted in the Coppa competition. Daniele Bettini, Bogliasco’s coach, said that the Maltese player’s return for his team was very important to boost the morale of his colleagues and give them a further push with his striking ability.

Unfortunately, due to his Italian team’s commitments Camilleri could not turn out for Malta in the Commonwealth Championship held at Aberdeen, Scotland.