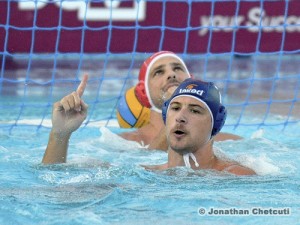 Steven Camilleri, the Premier Division Best Player for the month of July, celebrating one of his goals against Sliema

This was another fascinatingly close and exciting duel, unfortunately marred by too much tension in the water and on the Sliema side terraces which had security personnel intervening.

Sliema and Neptunes Emirates shared 16 goals, a result which reserved the Blues’ slim lead at the top and consequently the chance to maintain it till the play-offs.

There was little to choose between the sides except for goalkeeper Istvan Gergelj who played a blinder for Sliema. Neptunes had the better start but Sliema fought back to take the lead only for their opponents’ late reaction.

The match was dominated by rigid man-to-man shadowing, especially from Sliema. They took the lead with Neptunes over-turning the scoreline. Sliema’s 2-2 equaliser was followed by the Reds’ third goal.

Both sides were forced to shoot from a distance as only the outside two players were afforded space.

Neptunes went 4-2 ahead but Sliema hit back strongly to score three in quick succession and thus take a 5-4 lead at the half-way mark.

Sliema’s stringent press was proving costly in terms of expulsions even if Neptunes were wasteful in their extra-man sets.

Gergelj was a defiant figure.

Four goals were shared in the third session, leaving Sliema 7-6 in front at the start of the fourth.

The Blues were surviving with four of their units each on two major fouls, followed by Ferenc Salamon’s second personal fault early in the fourth session.

The Hungarian scored his third goal for an 8-6 Sliema lead as Neptunes kept squandering their man-ups.

With Daniel Paolella and Clint Debono out, Sliema were intent on surviving.

The Reds were still full of fight. In fact, they netted twice through Michele Stellini and Tamas Molnar to level matters.

They regained possession with 42 seconds to go but Niki Lanzon with two Sliema players in pursuit was pulled up for an attacker’s foul and eventuallly excluded with substitution for protests – decisions which did not go down well with the Neptunes’ clan.

Sliema could not convert their third from seven man-up set while Neptunes had netted only four times from 13.

Before the match Mr Peter Perotti, Chief Officer at Bank of Valletta, presented Neptunes’ player Steven Camilleri with the Premier Division Best Player award for the month of July, an honour he has not missed since its inception last year.
Also rewarded was Timmy Camilleri, Neptune’s player who is on loan with Valletta. He received the best player award from the First Division.