San Ġiljan rose magnificently to the occasion with a tactically sound and resilient performance which had neighbours and league leaders Neptunes Emirates meeting their waterloo when going down 14-13 in a heart-throbbing contest which had the crowd biting their nails throughout the four sessions.

The Saints were aware that this was a do-or-die affair. Indeed, they managed to shed off the psychological inhibitions to beat the Reds deservedly thanks to what turned out to be a decisive third session which they won 5-1. 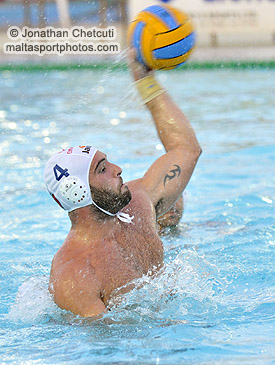 Goals came in quick succession in the first quarter.

The Saints led the scoreline but the Reds equalised every time before they forged ahead on 4-3 with 86 seconds left.

With San Ġiljan focusing their attention on Steve Camilleri and Tamas Molnar, Michele Stellini exploited his space he was afforded in the number one position when adding two more goals to the brace he netted in the opening session.

The other conversions came from Molnar and Steve Camilleri, with the Saints replying through Marco Avramovic, Peter Biros, his third, and a second goal from Paul Fava.

Still it was very tight and interesting as the teams changes ends with the Reds 8-6 ahead.

Fava was proving to be a thorn for Neptunes as he scored his third goal early in the third session.

Keith Galea made it 8-8 with Matthew Zammit giving his team the lead for the second time.

With the Reds showing signs of panic, the Saints goalrush was sustained with Galea and Dino Zammit opening a three-goal advantage for their team on 11-8.

Steve Camilleri reduced the gap with a second left. Meanwhile, Joseph Sammut had replaced Dean Camilleri in goal late in the third session.

Excitement grew to a peak in the last quarter. Lanzon scored twice to make it 11-all before Molnar was excluded for good after his third foul early in the last session.

Goals alternated, with San Ġiljan always nosing in front before Biros opened a two-goal lead for his team on 14-12.

Stellini’s fifth goal with just over two minutes left made it 14-13 but San Ġiljan managed to administer their advantage diligently amid the delight of their fans.