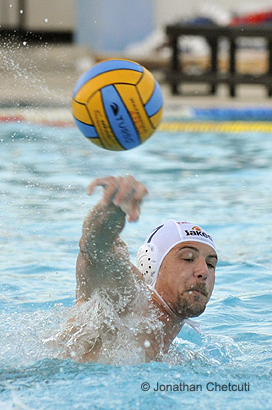 Steve Camilleri scoring one of his 5 goals against San Giljan

Neptunes made a big step towards earning a berth in the BOV KO final for Premier Division clubs when they dismissed neighbours San Ġiljan by a seven-goal margin for a 14-7 victory, a result which they will now take to the second leg on Wednesday.

The Reds were undoubtedly superior to the Saints who paraded newcomer Darko Brguljan.

After a close first session, Neptunes had already taken a 7-3 advantage and were looking good when San Ġiljan had Matthew Zammit expelled on three fouls towards the end of the second session.

With Neptunes having already gained the ascendancy, their edge grew more pronounced as they had Alexandar Ciric marshalling at the back and Steve Camilleri displaying his scoring instincts.

With Karl Galea also out on three fouls midway through the third session, San Ġiljan’s plight grew more desperate even if Tomas Molnar was also dismissed for Neptunes.

The Reds kept playing the tune before they finally went into play-pause mode. Their victory had long been sealed.