In 2010 Neptunes struck gold when landing the championship title for the 19th time under the shrewd guidance of Russian coach Sergey Markoch. Come 2013 and our boys lifted the title for the fourth consecutive year and the 22nd time in their in their 85-year history.

This was certainly not a windfall but the reward of skillful planning and grooming of quality players who matured into real thoroughbreds. Add to this the mix of local signings and engagement of first class foreign players and we had a strong squad that guaranteed the second four-on-the-trot championship titles after the team had ruled the roost between 1986 and 1989 when they also clinched four league crowns in succession. 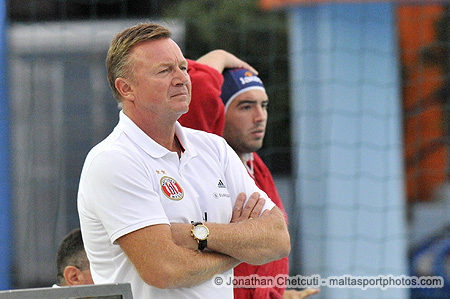 Next in line is a fifth consecutive league success, which would break new ground and make it a monumental achievement next year.

The ingredients are there and the recipe is provided by the midas touch of Markoch. In the coming year Neptunes will be after a historic feat.

The mental pressure will grow more intense as the boys will grapple with opponents determined to halt our imperious march towards loftier goals.

Our battling qualities have never been so evident as they were this year. After a steamrolling take-off we contrived to go three points behind our neighbours San Ġiljan when we first lost to Saints in the penultimate round and then to Sliema in the last.

With a match to go for the end of the league trek, it was incumbent for our team to win their last match against San Giljan, for whom early in the season Sergio Afric had assumed technical responsibility after leaving Sliema, and force a decider for the title.

Mental strain had to be overcome as the do-or-die battle on Saturday the 31st August loomed. A 9-8 victory which in the end proved to be hard-earned gave rise to the grand-finale the following Tuesday.

Although, unlike last year it was not ‘Victory Day’ when we then beat Sliema in the fourth of a possible five-match play-off, the lads’ response was magnificent. San Ġiljan put up stiff resistance but despite some rough edges on our part in terms of shooting and man-up set play, we took a 7-4 lead into the last minutes before we withstood our opponents’ final fling to emerge 9-7 winners.

The verdict was declared by the ASA minutes after the match had a premature ending with 0.9 second left. At that moment the Italian referee Stefano Riccitelli was hit by an object thrown from the San Ġiljan section and immediately signalled the abandonment of the sporting hostilities.

That was that and a few minutes later captain Niki Lanzon was presented with the BOV Cup by the Bank’s chief officer Anthony Scicluna amid the chanting of our numerous supporters who must have run their voices hoarse. Indeed, the decibel levels reached their peak when the players arrived at the club premises where celebrations went on till very late, with a now traditional encore the following afternoon.

The league prize was at the club for all to admire amid rumours that it will be kept for good since this was the fourth title win on the trot.

Long-standing captain Niki Lanzon and goal-scoring icon Steve Camilleri, who has matured into an all-rounder, were backed by our exceptional foreign tandem of Tamas Molnar and Alaksander Ciric, other top order players including the reliable goalkeeper, Alan Borg Cole, Michele Stellini, Jordan Camilleri, Sean Gravina and Clint Mercieca and complemented by Timmy Agius. Andrea Sammut, Gabriel Pace and Benji Lanzon all did their job when they were needed.

Needless to say, the number of all-time greats from our club who deserve a place in waterpolo’s hall of fame is increasing with the rightful inclusion of stalwarts Niki Lanzon and Steve Camilleri.

So 2013 ended with a flourish once again. The Winter League and the President’s Cup had been won earlier. Unfortunately, the missing link was the BOV Knock-Out, a cup we surrendered to Sliema after a 17-16 loss on penalties.

As usual, another ‘first’ was the Women’s league title which we won for the first time after the competition was revived. Added to that we landed the Under 15 league prize to reach the 50th success in junior competitions since 1989, with Neptunes unfailingly among any one of the age-group honours for the 24th consecutive year.

Again 2014 will be a landmark year for our younger category teams who are bidding to make it a quarter of a century of uninterrupted successes in any one of the cadets’ section honours.

We confidently look forward to more of the same in years to come.