Neptunes Emirates were given a test in resilience before finally pulling away in the third session and eventually in the last against San Ġiljan Giuseppe’s who were found wanting on their extra-man set as their four on 12 conversions demonstrated.

However, the gap in class between the teams became increasingly evident as the Reds’ powerhouse play found no response from their opponents.

The champions had the usual Vladimir Gojkovic directing operations impeccably, with the scoring prowess of Niki Lanzon and Steve Camilleri (each scored four goals) doing the rest. 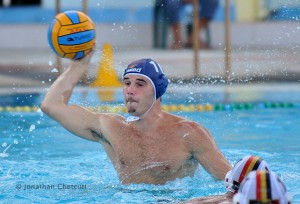 The Saints were equal to their more-quoted opponents in the first part of the game. They took the lead only for Neptunes to reverse that advantage.

Nikola Sutic scored the second goal but Gojkovic broke to give the Reds a 3-2 lead with seven seconds left for the end of the session.

San Ġiljan’s central zone was making it difficult for the Reds to service their centre. Moreover, Dean Camilleri was pulling off some fine saves. Nevertheless, the Balluta team extended their lead marginally to make it 7-5 at mid-point.

San Ġiljan were still very much in the frame.

Neptunes took over in the third session with Lanzon in fine scoring mood. Quick goals opened a four-goal advantage for them which was extended to 11-6 temporarily.

With Sutic reaching his hat-trick by the second session, Filip Trajkovic netted a second before Jordan Camilleri did likewise to put the Reds ahead 12-8 with the last session to go.

After the Balluta team had consolidated their advantage to 15-9, their coach opted to give all his fringe players a feel of the water, a ploy which enabled the Saints to close in on a 15-12 defeat with Trajkovic having scored four goals.

At the beginning of the match a minute’s silence was observed in memory of Sergei Markoch’s father who passed away recently.