Blues Too Brittle for our Solid Rearguard

This was another historical ‘first’ for our favourites in a long  and extending list of as many landmarks. An epoch-making fifth championship crown in succession and the 23rd overall title have been sealed after a 9-5 victory over Sliema.

Needing only one point to ensure that our successful league run would be prolonged, the lads went further than that, ramming home their superiority to beat brittle opponents who found it hard to breach our solid rearguard in front of a superb Alan Borg Cole in goal. 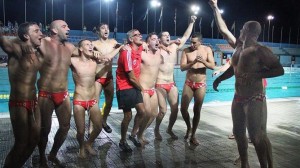 Celebrations after the game – Photo by Stephanie Mizzi

That was the main platform of our victory which resulted from a well-devised plan by master tactician Sergey Markoch, now a part of the ground-breaking sextet alongside captain Niki Lanzon, the free-scoring Stevie Camilleri, his reliable brother Jordan, Tamas Molnar and the powerhouse left-hander Michele Stellini. Indeed theirs was sweet music to our ears…!

These players are now an integral part of Neptunes’ pantheon of greats to go with others too many to mention.

The dream was fulfilled as the Blues struggled to make an impact against the exceptional playmaking of Lanzon and Peter Biros, as well as the splendid saves of Alan Borg Cole. As he commented, this was ‘the game of his life.’

We may have been below par at certain moments in the game. Nevertheless, our edge was evident throughout and that kept our opponents subdued till the very end.

Neptunes’ fans should for ever be grateful to our boys for yet another wonderful season also capped by our league successes in the Under 13, Under 15 and Under 17 categories.

Our golden era has been extended and, who knows, this may be kept up for years to come…!