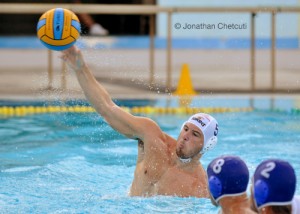 Jordan Camilleri in action against Sirens - Photo by Jonathan Chetcuti

The clash between Neptunes and Sirens was a no match. The Reds flew miles above their opponents and made sure the northerners would not soar anywhere near them. This they did within minutes from the start of the second session when they opened a six-goal lead.

The St Paul’s Bay team were a resigned lot against a side which did not miss the expertise from the bench of coach Sergey Markoch back in his country to mourn the loss of his father. Tony Camilleri took over and operations in the water were ruthlessly carried out in the covering and offensive phases.

After giving the Northerners a two-goal start, the Reds were in the driving seat when taking a 4-2 advantage inside the first quarter.

David Cutajar’s brace was followed by another from Steve Camilleri with Niki Lanzon and Matthew Pisani scoring the other two goals.

Double shielding from Sirens at the centre was to no avail as the champions’ artillery was far too heavy for their opponents. Eight goals with a single reply for Sirens made it 12-3 for Neptunes with Steve Camilleri and Lanzon already on the four-goal mark before eventually closing on a nap-hand, followed by supremo Vladimir Gojkovic’s poker.

Sirens’ predicament at mid-point was obvious. Predrag Zimonjic sought some face-saving formula which did not arrive. At least, it was a close third quarter as they only fell behind by another goal when finishing on the wrong end of a 5-4 scoreline. But they could not halt the rout.

It was time for more Neptunes’ refurbishment in the water after middle-order units had been brought in earlier. Young tailenders also made their mark as they were introduced simultaneously in the last quarter. A 4-1 scoreline in favour of the Balluta Bay team for a final 21-8 crushing defeat for Sirens underlined the depth of talent in the champions’ outfit.