As if the remarkable Olympic achievements of triple gold medallist, Tamas Molnar, besides other global and European honours he won were not sufficient to make it a legendary haul, the great Hungarian has left his indelible mark in Malta when he ended his career winning five championships in a row with his adopted club Neptunes WPSC.

The man was proud to be part of yet another monumental feat and the ovation and warm applause he got when he left the water towards the end of the last league match against Sliema on Saturday 6th September at the National Pool was as emotional as one could have ever imagined. 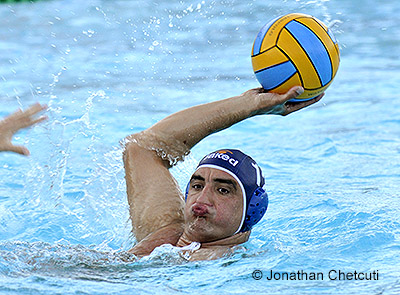 The adieu as he embraced the team’s Russian coach Sergey Markoch while waving to his team’s supporters will remain a treasured memory of his connection with Malta and Neptunes.

This ageless player has been likened to vintage wine, with its quality being enhanced as the years roll by. His striking skills when scoring 301 goals in five seasons remained exquisite till the very end.

But what was remarkable about him was his physical and versatile qualities which helped him stand to the rigours of modern waterpolo where fast swimming and constant changing of positions make the game so demanding.

The farewell his team mates and club members gave him on the morrow of his last match when he was also presented with a Maltese flag bearing the words ‘Tamas, you are a legend’ was testimony of the mutual bond there is between him and the club.

Indeed, we cannot find enough words to show our gratitude to Tamas for the fantastic contribution he gave Neptunes during our golden years between 2010 and 2014.

Thank you Tamas. Your name will remain synonymous with Neptunes for many years to come.