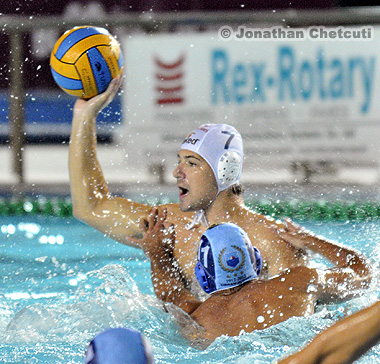 Steve Camilleri – Top scorer for Neptunes against Sliema with 4 goals

Sliema showed their recuperative powers to up their game considerably and thus cut the leeway in a best-of-five final series to 2-1 in what can again turn out to be another marathon for the title.

This was a deserved victory for the Blues, engineered by a solid defence and more power in attack especially through four-goal Ferenc Salamon and veteran Paul Privitera who grabbed a hat-trick.

Neptunes Emirates were unable to produce their best which was so evident in the first two games, and paid the price for being too erratic.

The Reds’ four-on-six man-up scoring rate was good but this time they lacked solidity in defence, something which their opponents showed in abundance.

The Blues started strongly and went into a 2-0 lead with goals by Privitera and Salomon, after which a fault in the electronic timing equipment stopped play for some minutes.

Alexandar Ciric pulled back a goal before the session ended.

Service to the respective centres had not been easy in the crowded five-metre zones, unless there was rapid shifting of the ball and a timely pass to the middle.

The more alert Sliema took a 4-1 lead, thanks to James Falzon and John Soler before there was a second stoppage due to the timing failure.

With the Reds being denied by efficient blocking, Salamon made it 5-2 before two goals at each end maintained Sliema’s three-goal advantage.

Sliema had clearly been the better team and their 6-3 lead by midpoint was fully justified. Ryan Sciortino replaced Ian Bugeja in goal for Neptunes at this stage.

On 7-3 for Sliema, after Privitera had netted a second, Neptunes grew increasingly edgy against an almost faultless Blues’ rearguard.

However, the dependable Ciric scored twice from the number one position on man-ups to make it 7-5.

However, Sliema’s tight marking was always posing problems for the Reds even if they reduced the deficit to 7-6 late in the third session through Steve Camilleri’s third goal.

Sergio Afric’s team opened a three-goal lead early in the last session only for Tamas Molnar at last to free himself from his op-ponent’s shackles to make it 9-7.

Meanwhile, Bugeja was back in Neptunes’ goal, with Sliema trying to administer their 10-8 advantage after Mark Meli and Camilleri had netted at each end.

It was an uphill struggle for the Reds, and with Salamon scoring his fourth goal from a penalty seconds from the end, Neptunes were forced to surrender.

Before the match, Camilleri received the shield for the Player of the Month award for August.

The fourth tie from the series will be played on Saturday.