by Times of Malta 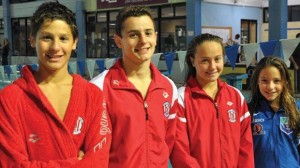 Neil Muscat was again in the limelight by breaking the 100m breaststroke B age group record in a time of 1:17.38. Muscat is edging closer to claiming all records in his category and he now holds 11 from a possible 12 records which is truly a remarkable feat never achieved in the past.

Amy Micallef found her form again in the 200m individual medley by eclipsing her own Group C record in a time of 2:34.39.

Julian Harding is dominating the butterfly events in Group C, this time lowering the record of the 50 metres event in a time of 27.58 seconds. He now holds all three butterfly records in his category.