Biggest Ever Victory Over Our Rivals

Adapted from the Times of Malta report by Alex Vella, National Pool 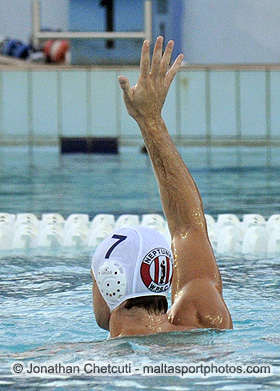 Stevie Camilleri celebrates one of his 6 goals

This was undoubtedly a thrashing victory over Sliema which our players and growing number of supporters will savour. It was the not only the 15 -5 scoreline that will stand out in the minds of our clan but also the manner in which we annihilated our opponents. The Blues were routed and reduced to smithereens. Neptunes were supreme, and if it were not for some momentary blips it would have been a bigger victory of mammoth proportions.

Quality waterpolo has often been associated with our team. When the boys click as a unit there is no holding them. The Blues had to face this reality on the 12th June as the Reds swept past them in roller-coasting fashion. It was teamwork at its very best as an almost impregnable rearguard turned out to be the solid springboard for quick forays by our players backed by perfect transfer of the ball and deadly finishing.

The charismatic Stevie Camilleri relished every minute of it, churning in six goals, some of which were of trademark power and accuracy. One of these was from a backhand executed in his inimitable style. Captain Niki Lanzon scored another great goal while Tamas Molnar and Alaksander Ciric, each scorer of a hat-trick, were the other usual tormentors for the Blues. All the others, including Jordan Camilleri, Sean Gravina, Clint Mercieca, Michele Stellini and the rest of the tailenders were at their best as the team performed almost flawlessly.

At the back-Alan Borg Cole reached out at every ball directed to his right or left, and that made the Blues miss out with shots going wide off the mark. One on 12 conversions on extra-man sets for them was also testimony to this solid defending.

Our team did not need to be perfect on similar sets as the three goals we scored from eight occasions showed. However, our boys thrived on their ability to find the net when the teams were on numerical parity as was evident from the 11 goals we netted.

After conceding an early goal we were soon on the scoring trail. Three goals in the opening session and five more in the second made it an 8-2 scoreline by the halfway mark. Surely an assuring advantage given the way we were playing. Sergey Markoch was the mastermind from the bench.

We were on velvet, despite sharing six goals with our opponents in the third quarter and contriving to miss out on several man-ups when Edward Aquilina was sin-binned for four minutes for serious foul play with just over six minutes gone in that session.

With the five-goal lead maintained on 11-5 before the last session got underway Neptunes again had their feet on the accelerator to add four more goals for a memorable 15-5 successes, the biggest on record in matches between the two teams.

Several Sliema supporters were seen scurrying away long before the final whistle. Their team did not live in the same street.

Thank you to the Neptunes lads for a truly royal performance.