For the second month running, our outstanding star Steven Camilleri has been voted as Player of the Month.

Steven won the award for July (another first!) and lately was also named winner for the August edition.
With Neptunes exhibiting such outstanding fare in the ASA competitions this season, it was almost a foregone conclusion that some player from our club would win this innovative award. 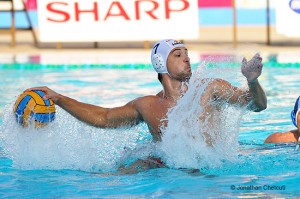 Steven, who has been turning out for the Italian Serie A side RN Bogliasco in the winter months finished twice as his club’s top-scorer and only last season he was just pipped by none other than German ace Heiko Nossek.

In Malta he has notched staggering figures, 73 in 2010 and 96 in the season just ended. These figures include, KO, league and President’s Cup matches.
In both seasons he edged his colleague in the Neptunes’ side, three-times Olympic gold medalist Tamas Molnar of Hungary.

The winner for the Division Two award was another ‘Neptune’, goalkeeper Andrea Sammut who turned for newly-formed Valletta this summer. Andrea received due recognition for his commanding displays between the Citizens’ goalposts this season. Among Andrea’s colleagues in the Valletta side were seven other former Neptunes’ players as Giorgio Sammut, Timmy Agius, Alan Galea, Alan Arrigo, Simon Cachia, Glenn Ghirxi and Clyde Bonello.

The awards were presented to the winners at the BoV offices in Fleur de Lys on Wednesday, September 13.