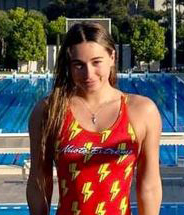 ANOTHER NATIONAL RECORD FOR MYA AZZOPARDI

Mya Azzopardi set a new National Record in the 200m freestyle on April, 24 in Edirne, Turkey. She broke the previous record which she held of 2:06.48 by half a second. Later in the afternoon, during the finals Mya Azzopardi smashed the record again by a further second where she swam a 2:05.11.

Mya has been training in Turkey for the past two months in preparation for her up-coming international meets when she will be representing Malta. Our sincere congratulations Mya.