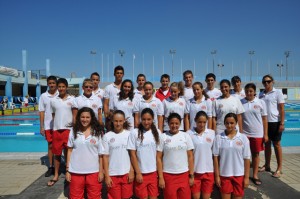 Nine new limits were set and personal best times were recorded as several swimmers from different clubs tried to give it their all over the five sessions held at Tal-Qroqq.

Four new marks were set at national level, two by Neptunes in team events and the others by Nicola Muscat.

The quartet of Matthew Zammit, Mark Sammut, Edward Caruana Dingli and Andrew Chetcuti posted a time of 1:38.83 in the 4×50 freestyle relay while that of Sammut, Andrea M. Agius, Chetcuti and Caruana Dingli clipped 2.25 seconds off the old limit when recording 1:51.84 in the one-lap medley relay.

The age-group records were registered by Neil Muscat (B), 28.03 in the 50 free, improving on his own previous limit.

The same swimmer also bettered his old best in 50m back by 0.55 seconds when swimming the distance in 31.65.

Francesca Falzon (A) did 32.82 in the 50m freestyle, beating the 22 year-old record held by Gail Rizzo of 33.68, and Matthew Galea (Sliema) sliced 0.23 seconds off his previous Group C limit when registering 30.28 in the one-lap backstroke race.

The next commitments for Maltese swimmers are limited to national representation.

Meanwhile, two swimmers who performed with distinction over the last years were given due recognition by the ASA upon their retirement from the national team.

Neil Agius and Talisa Pace rep-resented Malta on the European and world stage, the former uninterruptedly since 2001 and Pace since some years later.

Pace, 18, was a former record-holder in the 50, 100 and 200 freestyle and still holds joint national limits in all five relay events.