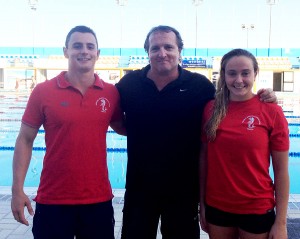 In the second Time Trial of the 2014-2015 season, Neptunes’ swimmers Amy Micallef and Julian Harding started on a bright note when they broke the national records in the 100 and 50 metres breaststroke respectively.

The former swimmer bettered the mark of 1minute 17.25 seconds set by Francesca Paolella in March 2004 when on Saturday she clocked 1 minute 16.78 seconds, the first time this girl inserted her name in the national records books. Harding, on his part, clipped seven hundredths of a second off his previous time registered in April this year when he covered the one-lap distance in 29.50 seconds to add to his other individual national 100-metre mark of 1 minute 05.14 seconds